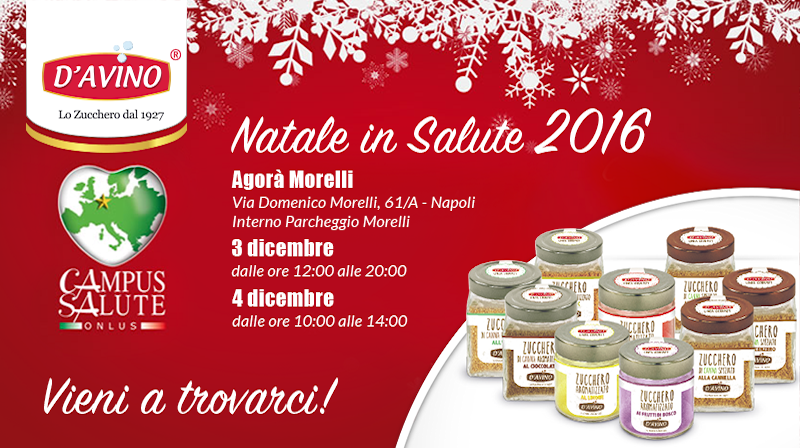 Posted at 10:27h in Blog, Eventi, Per il Sociale by admin
0 Likes
Share

December 3rd from 12 a.m. to 8 p.m. and December 4th from 10 a.m. to 2 p.m. D’Avino Sugar will take part in the charity event “Healthy Christmas/Christmas in Health 2016” sponsored and organised by Campus Salute Onlus at Agorà Morelli in Naples. D’Avino Sugar, founded almost half century ago, is an excellent business reality dealing with the production and packaging of different kinds of sugar. As has become tradition, the day before Christmas Campus Salute Onlus, sponsored by D’Avino Sugar, will organise a charity event to promote the message of prevention and support the less fortunate. Once again, Christmas in Health will take place in the wonderful location of Agorà Mirelli, in Naples. D’Avino has long been engaged in charitable efforts and solidarity events, in line with its idea of responsible enterpreneurship with strong local ties.

Over the years, D’Avino has been a protagonist in many important social initiatives, such as “La salute di Capri” and “Il villaggio della salute”. The company is also involved in a profitable partnership with associations and charities such as Susan G. Komen Italy, for the fight against cancer, and the Santobono Pausilipon Foundation, which deals with projects for the health and welfare of infants.

“We strongly believe that the company is also entrusted with a social function, a strong connection with the territory and a commitment to create strength and take action for the benefit of those in need. D’Avino Sugar strongly believes in pursuing this aspect: year after year we increase our commitment in social and charitable initiatives. As a constantly growing and consolidating business reality, we feel empowered by doing something for the community. With our attendance to the 2016 edition of “Natale in Salute” we confirm our commitment to social issues, but we will not stop here. Ours is a daily commitment.”